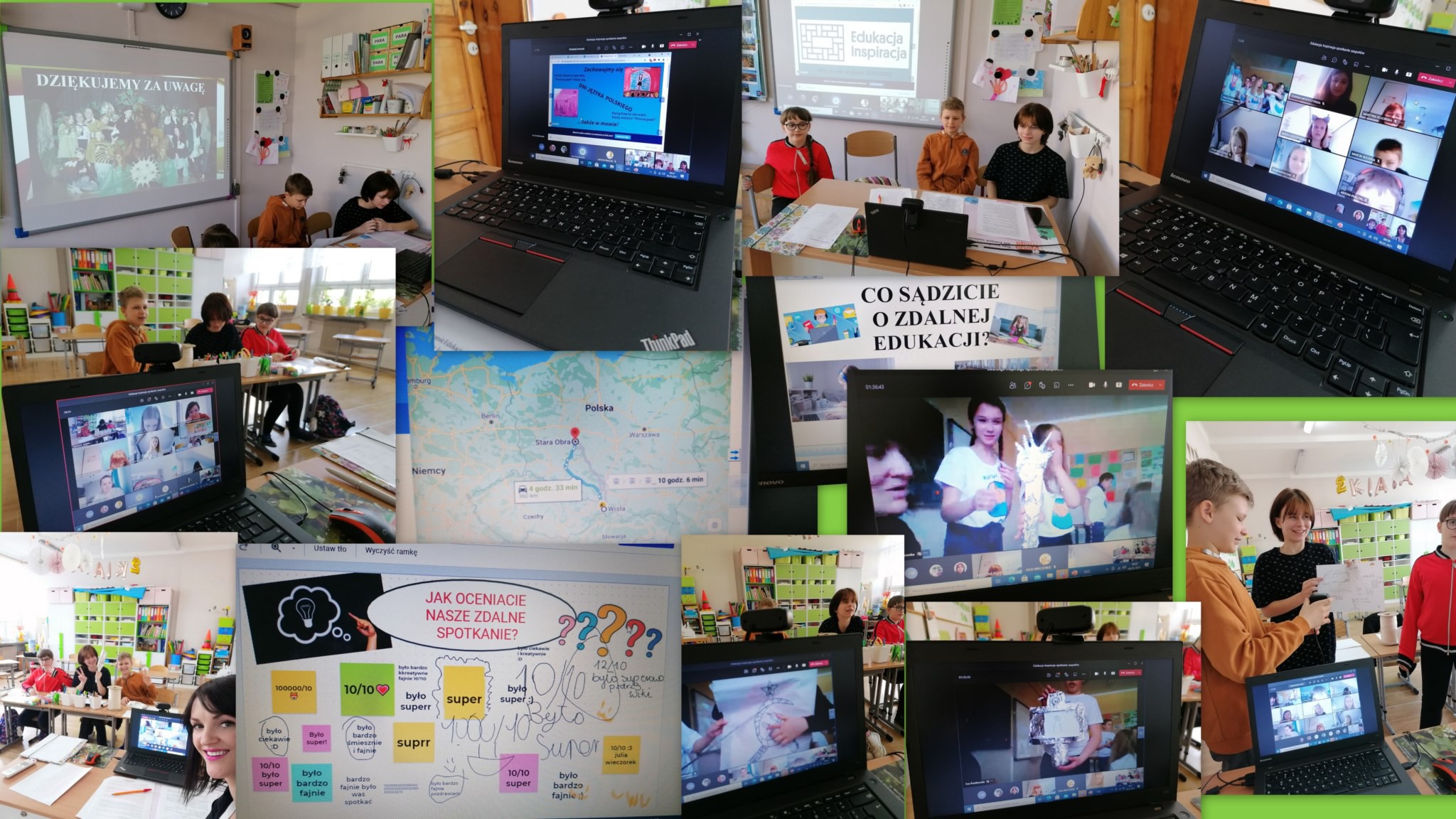 Many people are tired of online teaching and learning, which is understandable – but new technologies can also create great opportunities! Seven project teams from different regions of Poland have very recently discovered that for themselves, participating in the Education Inspiration program. They met online during our interschool meetings to talk about their educational projects. How did that go? Read our report!

In April and May, four interschool meetings took place, and two project teams composed of students and teachers-tutors took part in each of them. The teams were often several hundred miles away from each other, and each meeting was different – but the common denominator in all of them was curiosity and dedication of students.

The first meeting – of the team from Special Primary School at the Youth Sociotherapy Center in Ośno Lubuskie and the team from Special Primary School at the School and Education Center in Miłakowo was absolutely extraordinary – why? Both schools worked on a stationary basis throughout the pandemic, and this meeting was the students’ first remote learning experience. Students from the Ośno Lubuskie team showed us the tank placed on display outside their school. They told us its story – how it had got there and what they had learned about it working on their project. Students from Miłakowo, on the other hand, presented their beautiful lapbooks on patriotism, crosswords and tasks related to the subject and an impressive collection of Legos they had used to prepare their project. Building blocks were also used during the meeting – a prototype tank was built with them and shown on screen thanks to the team from Ośno Lubuskie.

The next meeting connected teams from Paweł Stalmach Primary School no. 1 in Wisła and Primary School in Stara Obra. Teachers planned many attractions for the event – they started with puns and ciphers based on which each team had to guess where the other came from. Then, students presented their projects – the team from Stara Obra talked about their theatrical performances and challenges they had faced during the pandemic, whereas the Wisła team shared what they had learned about etiquette and manners – today as well as throughout history, here and around the world. Later, integration games started – e.g. students invented, and then built together tools that could be useful to Alpha – an alien from outer space – if he had wanted to study online.

A team from Primary School in Marianka took part in two interschool meetings. First, they met with students and teacher from Public Primary School in Warszawice. The meeting started with a presentation of a stop-motion animation created by students from Warszawice as part of their project. The screening aroused a great deal of interest among the students from Marianka, who asked a lot of questions on how to create such a film, how much time it took to produce one, and what working on the script had been like. Then, the roles were reversed, and the Marianka team talked about their school play ‘The Little Match Girl’ which they had created and recorded with the assistance of their teachers. They also talked about challenges they had faced and how they had managed to overcome them. Based on their experiences, they talked about how they had promoted the performance and what had inspired them to create it.

The next meeting brought together the team from St. Brother Albert Primary School in Żurawiczki and, once more, the students from Primary School in Marianka. First, students from Żurawiczki presented a short movie on their team and their project, which was learning about their school’s history. Then, they answered the questions of students from Marianka, such as where they had found information on the history of their school, what had been the most interesting pieces of information they had found, who they had interviewed and how they had prepared for the interviews. Later, the team from Marianka talked about their performance - ‘The Little Match Girl’ – and answered the questions asked by students from Żurawiczki, e.g. how they had come up with idea for the play, if they were planning more performances and, if so, what would they be (‘Forefathers’ Eve’) and if the actors had been stressed about performing live.

All meetings were extremely interesting and inspiring. Both us and the teachers responsible for the projects have seen the potential for cooperation created by those meetings – and, perhaps, for more meetings in the future. We certainly hope we will meet again!

Education Inspiration is a grant program for teachers from small towns and villages conducted by the EFC foundation in cooperation with the ‘School with Class’ Foundation.