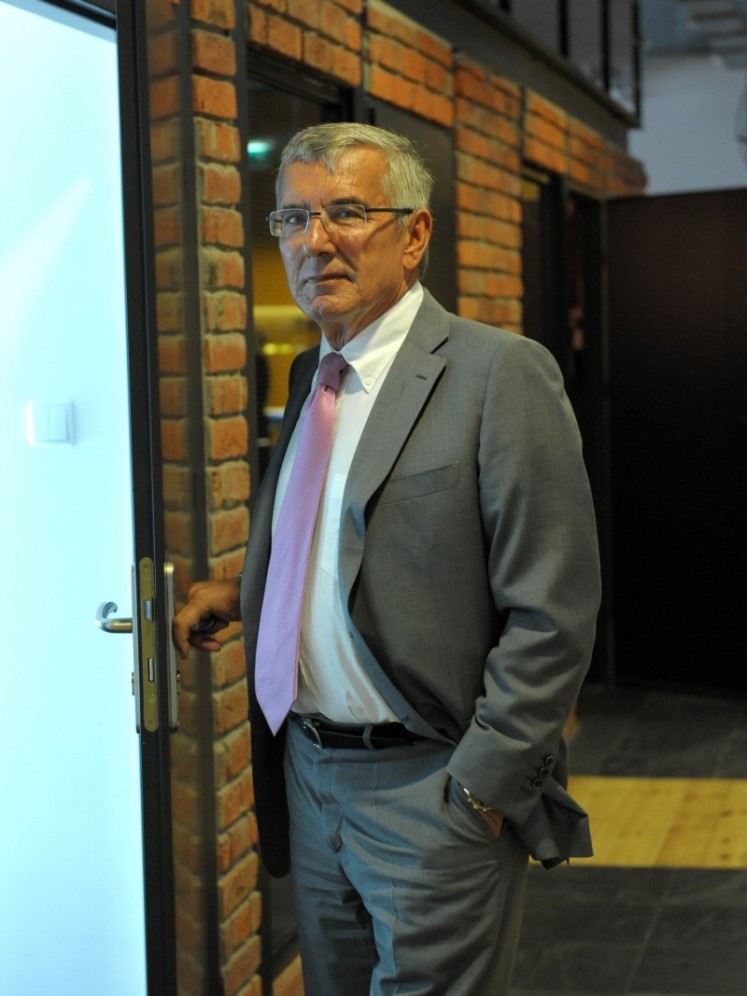 Interview with Andrzej Czernecki: Puncturing through to success.

About the unconquered Nobel Prize, the essence of matter, taking shortcuts, automatic pipettes, lancets, Palikot, the Bridge game face and moments of weakness - all from Andrzej Czernecki, creator of HTL-Strefa.

He is pretty good at playing Bridge. But back then he had to fold after the first dealt hand. Because the only cards he had, were dreams - a young person’s dreams, which made them limitless.

- I dreamed of becoming a Nuclear Physics Nobelist. In the mid 50’s, education in this field was still a blur. It was secret knowledge. Everything that had to do with the atom seemed intriguing and unexplored to me, I wanted to dive into it, discover something and be somebody. That’s why I went to study at the University of Warsaw.

Tampering with matter was always in his nature.

- All my life I loved digging into things, dissecting them, looking inside. When I was little, I took apart clocks, radios. When I was 8 years old, to my family’s distress, I remodeled a big standing clock and turned it into an alarm clock. I was fascinated with the essence of matter - the businessman confesses.

Studying physics is a continuous challenge. It is important not to fall behind. At all costs.

- We had a subject called The Mathematical Methods of Physics. It was Math at the highest levels of abstraction, extremely complicated. There was a written exam at the end of the course. 12 problems. With three of my friends, we created a “kolkhoz”. We knew it was impossible to complete the 12 exercises in the time we were given. Nobody has ever managed to do it before. So we agreed that each of us would complete four questions and then we would somehow exchange the solutions. We did it, we were the first students in the history of the Physics Department at UW, who managed to complete all problems in the given time - says Czernecki.

He was fiesty for a scientist. He threw some punches and received some as well.

- It was a wild youth. No one ever beat me in arm wrestling. We walked into pubs and made bets. Boxing, weightlifting. And skiing, which I love to this day - says Czernecki.

And of course, Bridge.

- For many years - during University and right after I graduated - it was the basis of my existence. I won against private initiatives as well as unsophisticated salesmen - Czernecki recalls.

For some time, he was even the President of the Polish Sports Bridge Union.

Going back to the fascination of tampering with the essence of matter, taking it apart piece by piece and the love for all things experimental, all of this paradoxically turned out to be the millstone in his scientific career and made his dreams turn into reality.

- During my 3rd year of University, I made the biggest mistake of my life. I chose to specialize in Experimental Nuclear Physics, instead of Theoretical. I soon discovered that while the latter was a field where one can grow and really discover something, the first offered nothing more than a career in building a nuclear bomb for the Russians or working in Geneva or America - which was impossible in Socialist Poland. My colleagues, who chose Theoretical Physics, are now renowned professors - regrets Czernecki.

In short, he chose a path without an exit. And lost the chance to win that Nobel Prize he was dreaming about. First hand - unsuccessful.

After University he worked “in science”. At the Nuclear Research Institute. It definitely brought him a lot of pleasure and his life was nothing like the seemingly grey life of an experimental physicist.

- Our department was situated on the balconies of the Congress Hall. Whenever there was a party convention, they kicked us out and we were given a work-free month. They invited rock n roll bands so instead of working, we listened to them perform - says Czernecki.

All of a sudden something changed. After a couple of months in his role, he began his PhD studies in Vienna. One day, two American businessmen in fancy suits, paid him a visit.

- They were representatives of a company producing very complex research equipment, which they wanted to sell in the Communist Bloc. Their offer was so attractive that I didn’t need long to make up my mind: it would take me two years working as an assistant to make the kind of money they were offering for a month of my work. Besides, what was there to think about? I was an experimental physicist in a Communist country. On the other hand, the transition to commercial work did hurt - Czernecki recalls.

For all of the 70’s, he worked for an American company called Backman Instruments, which produced biochemical scientific research apparatus. He traveled to the States for an internship, observed and learned and later set up an office in Warsaw, where he hired over a dozen employees and became the chief of sales in Poland and later the whole Soviet Union. Sales began soaring. Czernecki was learning more and more about business. It is the year 1981. Martial Law in Poland. Czernecki has to say goodbye to the Americans and go his own way. He decides to begin producing automatic pipettes - liquid dispensers. He created one of the first Polonia companies in the country - Plastomed (later PZ HTL SA - High Tech Lab). Using borrowed money, he launches the production of lancets.

- Almost everyone who was starting back then, made money much quicker than I did. Maybe it wasn’t too smart, especially in those times, but it was much more important for me that I was building something from scratch, creating new things, living in peace with myself, rather than just making money. Collecting used tires, freezing strawberries, selling shoes or computers just didn’t offer that. The result was that when others went on vacation to warm and exciting places, I took my skis and went to Zakopane - says Czernecki.

It was not a good time for manufacturers and yet he managed to skip the primitive capitalism period and when others were still doing their “strawberry” businesses, Czernecki was building his second factory flooding the RWPG (Council for Mutual Economic Assistance) with lab equipment.

From one day to the next, all of it fell apart. It was the year 1991 and all of a sudden the transfer ruble was gone.

- I was saved from bankruptcy by L’Oréal, which was just entering the Polish market and decided to buy my factory hall on South Praga for 2 million dollars. That money allowed me to survive - remembers Czernecki.

At that time, most companies - also the Polonia ones - went underwater like submarines. This time, he bidded well and won the hand.

His is not a bootblack-turns-millionaire kind of story. He worked long and hard to earn his success. Perhaps even too long.

- The fact that a bootblack can become a millionaire is as much of a tale as the notion that your first million has to be stolen - argues Czernecki.

One day, he received some shocking news.

- I remember as if it were today. The doctor said he had two kinds of news for me: good and bad. Bad - I have blood cancer. Good - I’m not going to die straight away, maybe in 10 years or so. I asked about the treatment. He said: conservative. Which means - we will not be treating this because there is no point - the entrepreneur recalls.

What kind of thoughts go through a person’s mind in a moment like this?

- It’s not true that all hope is lost and you lose the will to live. Though when my wife suggested buying a new suit, i thought “why the hell?” - he says.

Bottom line is to believe. Because people make mistakes. A couple months later in New York - the best oncology clinic in the world. The doctor looks at my test results and says: I have two kinds of news for you: good and bad. Bad - you have a maximum of 3 years to live. Good: this can be curable. A fight for life. 30% chances. It’s been 14 years since then.

- I made it. What the disease left behind is a deep respect for other people’s suffering. Before, a person in a wheelchair seemed to me like someone from a different planet. But I could become that person five minutes from now. Empathy for human suffering - he confides.

So the third hand turned out successful as well.

Diet. Fighting with the disease. End of the 90’s. And another fight. With people and ideals. And with the competition.

- The biggest problem was that the competition entering Poland was constantly stealing my employees, because with the things we did, they were exceptional experts. I was furious when I heard the rates they offered. But I wasn’t angry with my people for leaving, I would have done the same. We later met at fairs, because half of the people working there were my old employees - Czernecki recalls.

What happened next? After a medical fair in Germany, where he accidentally found out about the forecasted increase in demand for blood lancets, he decides to go all-in. Global expansion. Because if you are lucky, have an idea, are a risk taker and aren’t afraid to get your hands dirty, then sooner or later it has to turn into success. There’s something else.

- The greatest murderer of success is acting nouveau riche. Quick money, quick luxury. Today, some have it but they chose to live abroad, others are here but they have nothing left. I’m here and I have it because for years, I have been placing the company profits back into the business - Czernecki philosophizes.

He doesn’t squander away money, he doesn’t take out dividends. He does cut off the coupons, but in a very moderate way. If he wanted to, he could live luxuriously, or even lavishly since recently. Does he remember the first luxury he le himself buy? A moment of “weakness”, extravagance?

- Mid 90’s, I was battling cancer. I wanted to buy an apartment somewhere in Florida. A small one. I had 100 thousand dollars. That would have been enough but one day my friend showed me a house on an island near Miami. I went crazy about it and even though it was 5 times the previous amount, I bought it with a bank loan. I had no idea how I was going to pay it off. I even thought: what the hell, I’ll enjoy it for two years and then they’ll take it away - he admits.

They didn’t. Being in a market niche paid off. And still pays, because Czernecki doesn’t throw himself into other opportunities. He is strictly guarding his share from the takeover attempts of the competition. Very efficiently - he holds 70% of the global market. Well, sometimes he makes an exception. But that something has to have a competitive advantage. Like the Polish invention - the blue laser.

Unfortunately, the clash of a scientist’s dreams and the dreams of a businessman did not work out.

- I am slowly becoming comfortable with the vision that one day I will have to hand the baton over. Regret? That’s what life's about. I achieved so much that I have the luxury of being able to think this way. My life was not empty - he sums up.

He’s bluffing of course. He still has the cards in his hands.