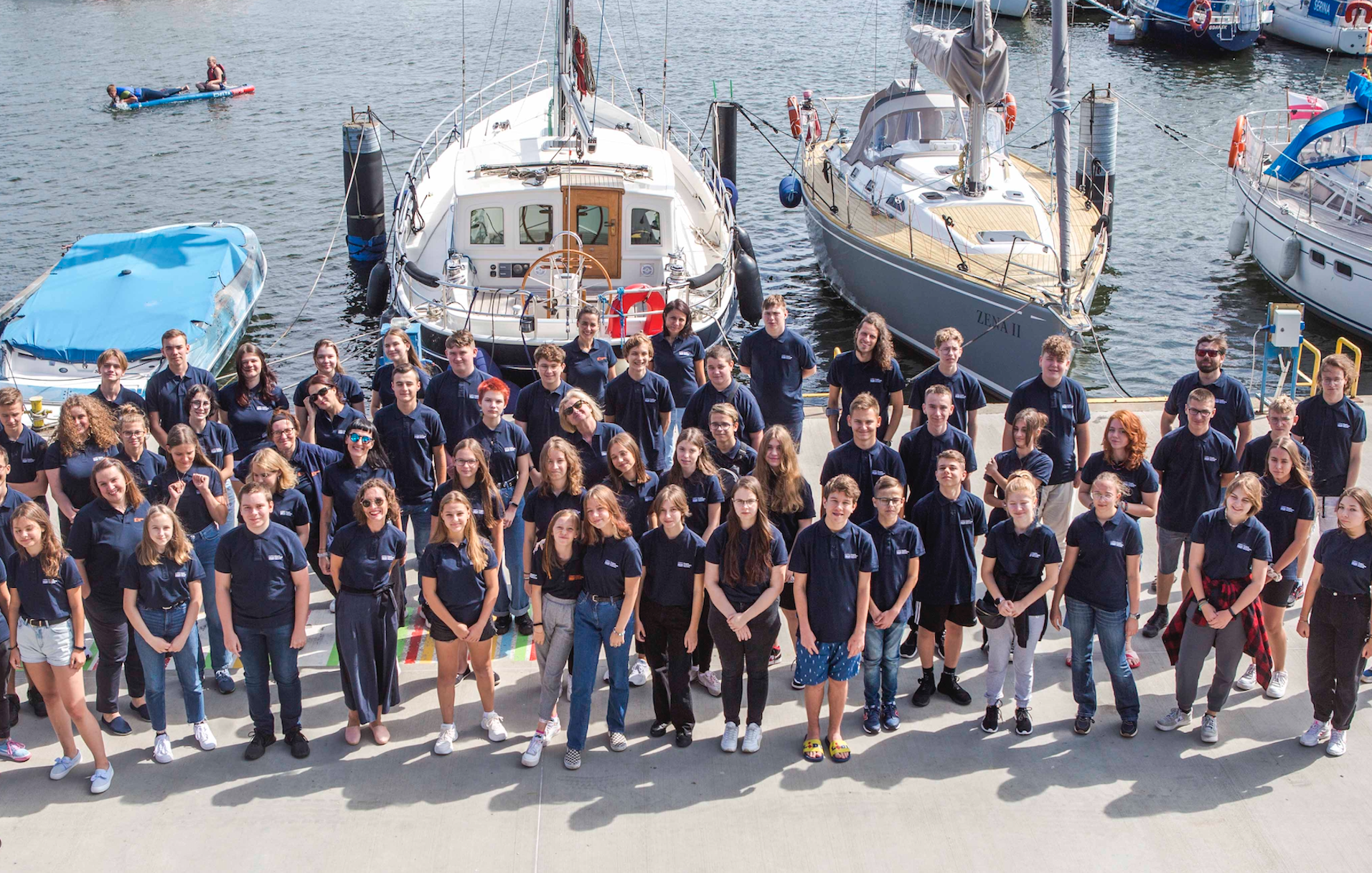 First smiles, first conversations - names still get mixed up, but the closeness between us is already there.

Gdańsk, to which we came from all over Poland, welcomed us with the sun. We spent four emotion-filled days of our team-building trip at the seaside with 57 scholarship holders who had joined Horizons this year. They were accompanied by older colleagues, including those from the EFC alumni association.

After months and months of pandemic isolation, we were reminded how fun it is to do things together. To admire the sunset on the Gdańsk beach. To sing our throats dry by the fire, and then go for a walk along the seaside and the mouth of the Śmiała Wisła at dawn, where, together with the ornithologist Ewelina Kurach from the KULING Water Bird Research Group, we did some bird-watching, and we were lucky enough to see a white-tailed eagle. The eagle symbolizes victory and strength. We consider it a good omen for the coming school year.

Things are more enjoyable when we're together. And that's not a joke - this is what the students of one of the best universities in the world - Yale University - are taught. Scientific research proves that even chocolate, when eaten in company, tends to be sweeter. That is why we visited the Old Town of Gdańsk, not individually, but divided into groups. We turned sightseeing into a city game with many different routes.

We found out where people ate in Gdańsk centuries ago. Did you know that, before World War II, there were as many as 560 restaurants in the city, compared to less than a hundred today? We fell in love with the city, visiting its most romantic nooks: the alley of kisses, the gate of lovers, the bridge of love. We didn't count the time, always on a lookout for the city sundials. To this day, only six of them have survived in Gdańsk. Three in the city center, two in Oliwa and one in Wrzeszcz. We got to know them all. We were inspired by Gdańsk's female pioneers. The heroines of this tour have written their personal stories into the history of the Free City of Gdańsk. Walking around the Old and Main Towns, we discovered the figures of strong and extraordinary women. Among them Stanisława Przybyszewska, poetess, Maria Krzyżowska, singer, and Irena Nadolna-Szatyłowska - have you heard about her, an athlete who loved motorcycles, gliders, and traveling? She lived as she chose, in spite of the rules governing the society at the time, proving that there is no such thing as 'male' and 'female' professions. In 1958, she landed a glider on Rajska and Gnilna Streets during the May Day celebrations. Before that, she flew it over the crowd gathered around Błędnik. In 1964, she was the first woman in Poland to obtain a license of a speedway race referee. She professed and - what is even more important - she lived according to the principle 'Time flies too fast for us to sleep through it'.

We didn't sleep through our trip. We got to know each other and opened up to one another during classes conducted by Agnieszka Jabłońska-Buchla and Anna Mazek, psychologists of the Foundation. We kayaked along the Śmiała Wisła and Martwa Wisła, stormed by strong winds, led by our fearless guide, Katarzyna Michałowska. We discovered the secrets of the 'zero waste' lifestyle during ecological workshops conducted by Krzysztof Beznar, eco-activist. Graduate of the Faculty of Biology, Geography and Oceanology at the University of Gdańsk, working as an ornithologist and specialist in environmental monitoring, he has been a volunteer and activist of various environmental organizations for 20 years now. Thanks to him, we also know how important it is to save wild pollinators.

We went for a walk in the former shipyard area. We visited the wonderful European Solidarity Center. Its multimedia exhibition tells the story of the Solidarity movement and the changes that it inspired in Central and Eastern Europe. In addition to old photos, the ECS also offers film and audio materials. The Center, on a surface of 3 thousand square meters, houses incredibly moving memorabilia from that period. The crane Anna Walentynowicz, activist of the opposition, used to work at; it was her disciplinary dismissal in August 1980 that sparked the workers' protests that led to the strike. At the museum, there are boards with 21 demands of the Inter-Enterprise Strike Committee placed on the gatehouse at Gate No. 2 of the Lenin Shipyard in Gdańsk, as well as the jacket of the 20-year-old shipyard worker Ludwik Piernicki, the tragic victim of December '70, with bullet holes still visible.

History is important – it allows us to draw conclusions and live better, wiser lives. By inviting future scholarship holders to the Horizons program, we show that, as an educational foundation, we are committed to understanding education as broadly as possible. We create space for an education that keeps up with the challenges of a changing world, for critical thinking and civic activism. The four days of our integration were a testament to that principle. We left Gdańsk as a strong - and very inspired - team.

The 'Horizons' Scholarship Program is implemented by the EFC Foundation in strategic partnership with the Starak Family Foundation.