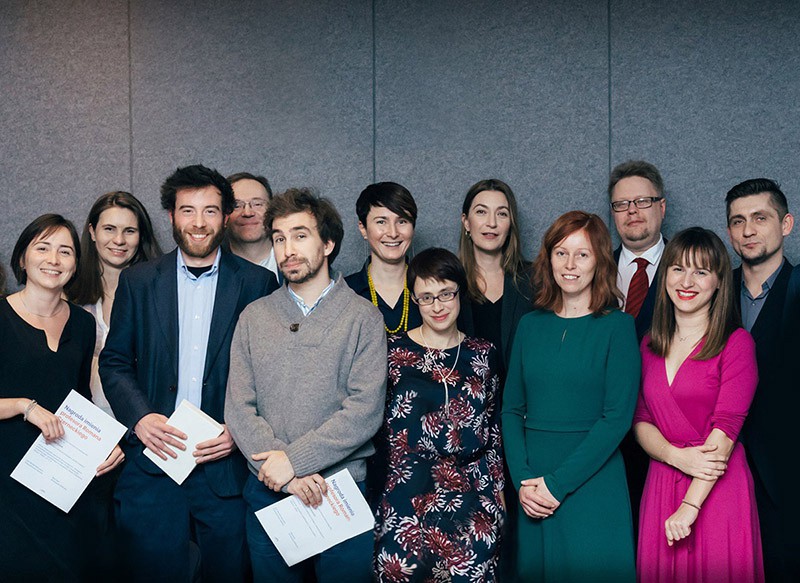 On November 29th, in the EFC Foundation office in Warsaw, we had the pleasure of honouring the laureates of the Roman Czernecki Prize.

The award was presented for the first time with the hope that we can distinguish talented authors in the future. The idea of the contest organized by the Roman Czernecki Foundation is to support the debate about Polish education through promoting publications that are both accurate and innovative from a scientific point of view, and that can be used by scientists and teachers in practice. Awards are presented in two categories: Scientific and Journalist Article. In the Scientific Article category, the committee decided to present two equal prizes of 10 000 złoty. The first award went to Sylwia Bedyńska, Izabela Krejtz and Grzegorz Sędek for their publication entitled “Chronic Stereotype Threat Is Associated with Mathematical Achievement on Representative Sample of Secondary Schoolgirls: the Role of Gender Identification, Working Memory, and Intellectual Helplessness”, published in the “Frontiers in Psychology” magazine. The second awarded publication was written by Anna Baczko-Dombie and has been published in the quarterly journal “Education” under the title “An Escape from Mathematics. Reconstructing Processes in the Social Context of the Object Image.”

In the Journalist Article category, we presented the award to Justyna Suchecka for her publication in “Gazeta Wyborcza” entitled “Who are you? The Citizen of the Digital World.”

Additionally, we wanted to appreciate a group of journalists, who sparked an interesting discussion about education this year.  The committee gave a special prize to the authors of Spięcie - a project undertaken by five editorial offices together. Nowa Konfederacja, Klub Jagielloński, Kontakt, Kultura Liberalna and Krytyka Polityczna - writers representing those five journalist environments joined their efforts trying to answer a seemingly easy question: “what school do we want for our children?”

We received 210 publications - 171 scientific articles and 39 journalist articles. This is how professor Michał Fedorowicz, head of the committee, summed up the competition: “we were surprised by the large amount of articles we had the pleasure of reading. We’re trying to build lasting relationships between scientists and professionals, who put science to use. We hope that the contest will encourage accurate scientific analysis, which can have a real influence on teachers and their work.”

Congratulations to all the winners and participants for their great work!